The days after the death of Jesus were days of fear and weeping.  Those who loved Him were crushed by His death and didn't expect Him to rise - they didn't even expect Him to die.

However, Christ appears raised bodily to many of these people, demonstrating that He had defeated death, and was the One sent from Heaven to save sinners.  His death then wasn't a failure, but God proved by the resurrection that Jesus' death paid for the sins of all who trust in Him.

This was not merely a spiritual truth, it was a historical event that needed only happen once.  God provided many eyewitnesses of the death and resurrection of Jesus so that not only they would have eternal life and forgiveness and adoption as God's children - but whoever believed in the One whom they testify of - Jesus. 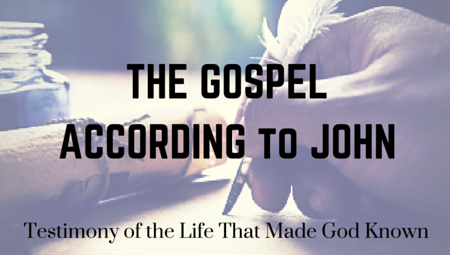 John: Testimony of the Life that Made God Known

A Gospel Great Enough to Hold Christ's People Until He Returns

How Christ, the Good Shepherd, Cares for His Sheep

Christ Gathers in a Multitude to Enjoy Fellowship with God

John: Testimony of the Life that Made God Known
John 21:1-14

Christ Has Risen: We Can Have Forgiveness, Adoption, and Eternal Life

John: Testimony of the Life that Made God Known
John 20